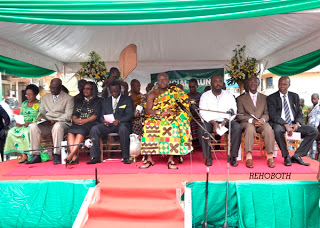 Sinapi Aba Savings and Loans Company Limited (SASL), has opened at Adum in Kumasi to soar high in providing an economic shade for its clients. The opening has been successful as a result of the granting of a license by the Bank of Ghana (BoG) which is an indication of the Central Bank’s confidence in the Board and Management of the SASL to play its role with due regards to provisions of the Banking Act 2004 (Act 673) as amended and other directives.

As one of the financial non-governmental organizations in the country, it has entered the saving and loans sector of the economy as a result of an added advantage of a parent company, Sinapi Aba Trust (SAT), which has involved in project management, youth development, transformation, and impact assessment activities. The commissioning of the other three branches of the SASL was done simultaneously at the Central Market, Old Tafo, and Abuakwa, all in Kumasi. Speaking at the commissioning ceremony, the Assistant Director of BoG, Mr. Raymond Amanfu who represented the Head of Banking and Supervision of BoG said the savings and loans industry was one of the fast-growing sub-sectors in the financial sector of the Ghanaian economy.

He indicated that the sector comprised 22 companies with a total asset of GH1, 776.82 million at the end of May 2013. He said that represented a growth rate of 89.55 percent over its total assets in 2012 (GH937.40 million) between January 2013 and May 2013; adding that the industry had recorded a growth rate of 34.17 percent “indicating a good start for the year 2013”. He said it was the desire of the central bank to broaden the financial intermediation spectrum using institutions such as SASL to link up the unbanked population especially micro, small, and medium scale enterprises (SME) with financial service providers.

He expressed the expectation that SAT would inject more competition into the micro, small, and medium businesses landscape in the country by providing affordable, reliable, and convenient banking services through innovative credit delivery and recovery methods, client advisory services, and money transfers. The Asantehene, Otumfuo Osei Tutu II who commissioned the branch office expressed delight at the opportunity utilized by SAT to come to being its first savings and loans company as an institution committed to make Kumasi its operational headquarters.

He commended the management of SASL and welcomed its decision to base its headquarters in Kumasi, saying that it was to set the right trend and expressed the hope that others would do well to emulate. He also expressed the hope that in order to safeguard the people and protect the savings and loans industry, BoG would maintain its supervisory functions and expected the management of SASL to bring to the fore, the ethical element in micro-financing.

The Chairman of the Board of Directors, Mr. Joseph Ebo Hewton recalled that the call from clients who had been brought up from the bottom of the economic ladder for SAT to convert to a deposit-taking institution started many years ago. He stated that: “As a financial organization we are not oblivious of the problems some microfinance institutions find themselves in, some of which have resulted in the lack of confidence by the general public in microfinance institutions”.

He praised the founder father of SAT who doubles as the current Board Chairman, Bishop Davies Freeman, and the first Board Chairman of SAT, Rev. Dr. Kwabena Darko for their vision and fortitude that brought to being the SASL. He, however, gave an assurance that the SASL had over the years established a benchmark as a well-respected organization and that the SASL would deepen the confidence that its clients had had over the years.

Fact Sheet. Sinapi Aba Trust (SAT), a member of the Opportunity International Network was established some 19 years ago in Kumasi with the vision to become an institution dedicated to the building of a nation under God Almighty where the strong helps the weak with all people having the dignity of providing for themselves, their families, churches, and communities.

The target of SAT from the onset was the economically active but poor who were determined with a little support to improve their economic situations to support their families, communities, and society as a whole. SAT currently has over 140, 000 clients and has grown to be one of the largest financial NGOs in Ghana Pictures: . Asantehene, Otumfuo Osei Tutu II (middle in cloth) cutting the tape during the commissioning of the Adum branch of the SASL in Kumasi. Otumfuo Osei Tutu II (middle) seated among other dignitaries at the commissioning ceremony.